Zomato is going Aerial: Drones to soon deliver your food 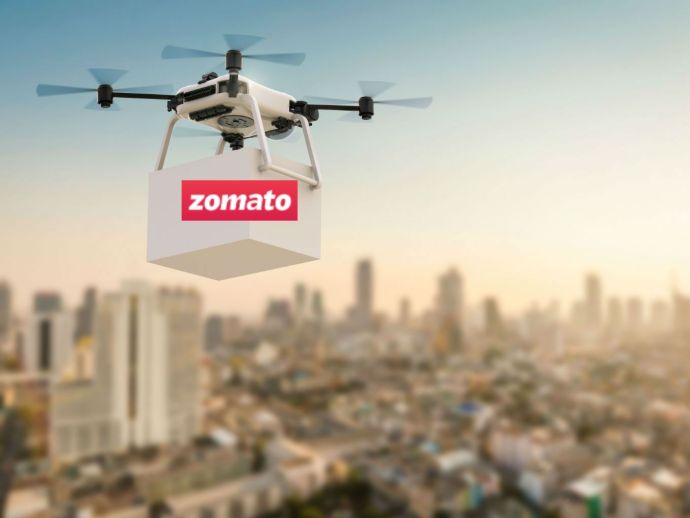 Zomato the Indian based largest food Delivery Company in India which is spread across almost 213 cities in India is working on introducing a faster delivery service.

With the growing population of the country, there is also a huge growth in the number of vehicles both four-wheelers and two-wheelers and hence an increase in road congestion or traffic. Traffic is posing a huge hurdle for almost everyone who travels every day to work, home or anywhere; and the sufferer is not limited to the common man but even companies especially those that provide delivery services to their customers face a huge time and financial loss due to this.

Zomato delivers the ordered food with two-wheelers which helps in combating with the extreme traffic. It takes an average of 30.5 minutes for a biker fleet to deliver an order which is somewhat fine however half an hour is still a lot of time especially when the customers are in a hurry. Roads have become much wider and better compared to the past and have really helped in improving transportation however vehicles have increased tremendously which has led the current roads to fail in improving the day to day commute.

To improve their (Zomato) delivery services and reduce the time taken the company has started working on using aerial route.

Yes you heard that right, now food will come from the sky!!

The company has been working with drones for their delivery service which would totally change their route as it would be aerial based and there would be no hindrance in the delivery. A hybrid drone was also successfully tested with a payload.

The drone carried a payload of 5 kgs for a distance of 5 km in 10 mins, said Deepinder Goyal, CEO of Zomato, which aims to deliver food to customers in less than 15 mins. The delivery was totally for test purpose and was not commercial; the drone hit a top speed of 80 kph.

As said by Deepinder Goyal, CEO of Zomato, “Fifteen minutes is only possible if we take the aerial route – roads are not efficient for very fast delivery. While our biker fleet nowadays delivers in 30.5 minutes on an average (which is the fastest in the industry as far as we know), every incremental minute with our fleet becomes harder as it separates our users from their ordered food,”. Also, in connection with this, Zomato acquired the local drone start-up TechEagle last year. Goyal also informed that the company has also finalized the design for its drone which is lightweight and hosts an array of sensors to detect and avoid static and dynamic objects in its journey.

Goyal also added saying, “Although being fully automated, each drone is currently being tested with (remote) pilot supervision to ensure 100% safety. Over time, as we have more data, we might not need remote pilot supervision,”

Along with the competition, Uber in partnership with McDonald’s has also lately been working on drone delivery for their UberEats business and has also concluded their initial phase of testing of their drone at San Diego State University. Adding to this, Amazon has also planned to begin drone deliveries within months.

The firm said it will form a consortium, in accordance with the local government’s direction, to take up experimental drone operations in the country to test their feasibility in the real world. Looking into this matter New Delhi has expressed its concerns over firms that want to operate drones commercially in the nation. Recently, Director General of Civil Aviation asked interested firms to express their interest in the experimental use of drones that travel beyond visual line of sight. Presently, local regulation requires them to operate drones only during the day and within line of sight.

Goyal expressing his thoughts on the idea also said, “Food delivery by drones is no longer just a pipe dream. It’s almost here. Regulatory hurdles are not trivial, and the government’s concerns need to be looked at from various (valid) points of view. Having said that, the tech is ready to fly and I am confident that drone delivery will be commonplace sooner rather than later,”

With this idea soon coming into practical implementation, will it be feasible and practical or not is a question that only time will answer.